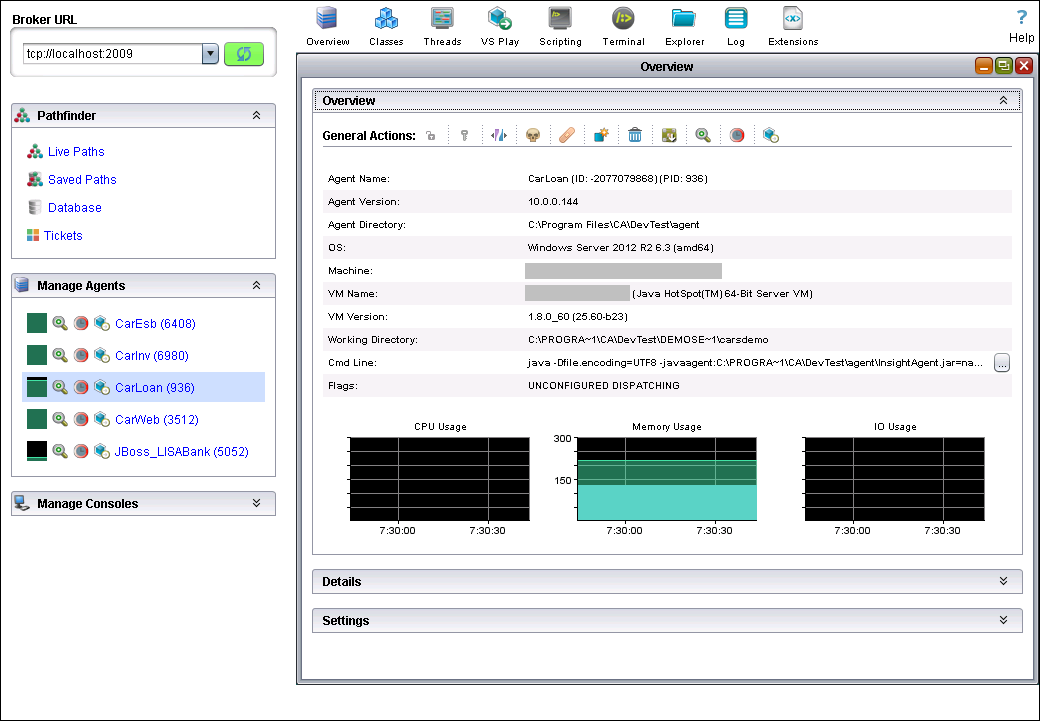 The left area of the user interface has the following components:
If the
Manage Consoles
pane is not wide enough to display the broker and console names, the names are replaced by white space. Widen the pane until the names appear. Alternately, you can place the mouse pointer over the white space to display the names as tooltips.
The main area of the interface includes a toolbar. The toolbar changes depending on what you select in the left area:
Live Paths
The
Live Paths
tab displays a snapshot of the live traffic captured by all the agents that are connected to the broker.
When you first view the traffic for an application in the
Live Paths
tab, you might find that the volume or granularity is not ideal. You can address these issues by modifying the agent configuration. For example, you can remove protocols from being captured or add protocols that are not currently being captured.
The following graphic shows multiple transactions in the
Live Paths
tab. One transaction is selected.

The toolbar contains two refresh icons:
Each node in the
Component
column represents a transaction frame.
The horizontal bars in the
Timing
column provide a visual indicator of the duration of each frame. For frames other than the root frame, the horizontal bars also indicate when the frame started and ended in relation to the root frame. A horizontal bar can include a vertical divider, which indicates the proportion of time that is spent in CPU compared to the wall clock time. You can view the time, duration, and CPU information by placing the mouse pointer over a horizontal bar.
To configure the amount of data that appears, click
Filters
. You can set each protocol to one of the following levels:
To view the agent and thread for a frame, place the mouse pointer in the first column.
When a transaction spans multiple agents, the first column uses different shading for each agent. The following graphic shows an example of this behavior for two agents.

To view more information about a frame in the
Component
column, select the frame. One or more of the following tabs appear:
If you enable profiling for an agent and then record some transactions, you can display the full call tree for any frame. Right-click the frame and select
Show call tree
.
You can filter the call tree by absolute duration and relative duration.
Saved Paths
The
Saved Paths
tab displays the transactions that have been persisted to the
DevTest
database.
The following graphic shows the
Saved Paths
tab.

To view the full details of a transaction, double-click the transaction in the
Call
column. The window that appears is similar to the
Live Paths
tab.
To run the transaction again, do the following steps:
Configure the Amount of Data Captured
You can configure the amount of data that a Java agent captures for each protocol. The following capture levels are available:
Follow these steps:
Configure Agent Properties
You can view and update the properties for a Java agent.
Follow these steps:
View and Configure Logging
You can view the log messages for a Java agent.
The following example shows a partial set of log messages.
Follow these steps:
View and Manage Classes
You can view and manage the full class hierarchy that is loaded in the Java virtual machine.
The following graphic shows an example of the class hierarchy. The
javax.ejb.EJBMetaData
interface is selected in the left pane. 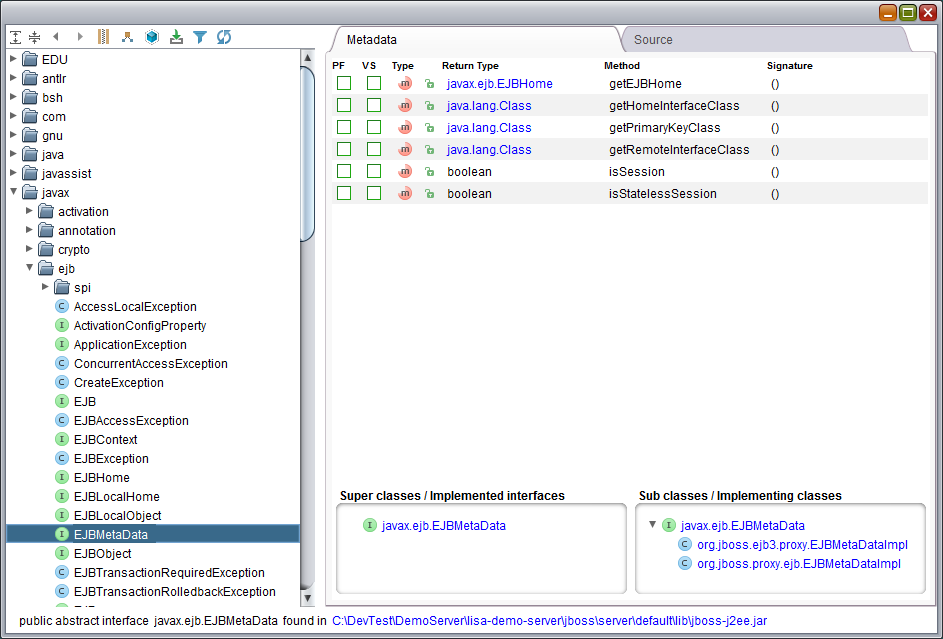 The
Metadata
tab contains the following information for the selected class or interface:
The
Source
tab lets you decompile the selected class or interface for debugging purposes only. When you click the
Source
tab, you must confirm that you have sufficient rights to view the decompiled code.
The Live Instances and OQL Queries lets you view objects that are currently live in your server.
Follow these steps:
Manage Files
The Application Trace Kit includes a window that displays two sets of files:
You can perform file management tasks from this window.
Follow these steps:
Execute Remote Commands from the Terminal
The Application Trace Kit lets you display a command prompt or shell for the computer where the selected agent is installed.
You can perform any command that the operating system supports. For example, you can restart a process or check memory usage.
Follow these steps:
CPU Profiling
By default, the
DevTest
Java Agent captures only a subset of the traffic for an application. If you enable CPU profiling, the agent captures most or all of the traffic.
This feature is useful when you think that the agent is not capturing enough data or the right type of data for your purposes.
CPU profiling can impair the performance of the application. Therefore, we recommend that you enable this feature only on a temporary basis.
The following graphic shows the CPU profiling tab. 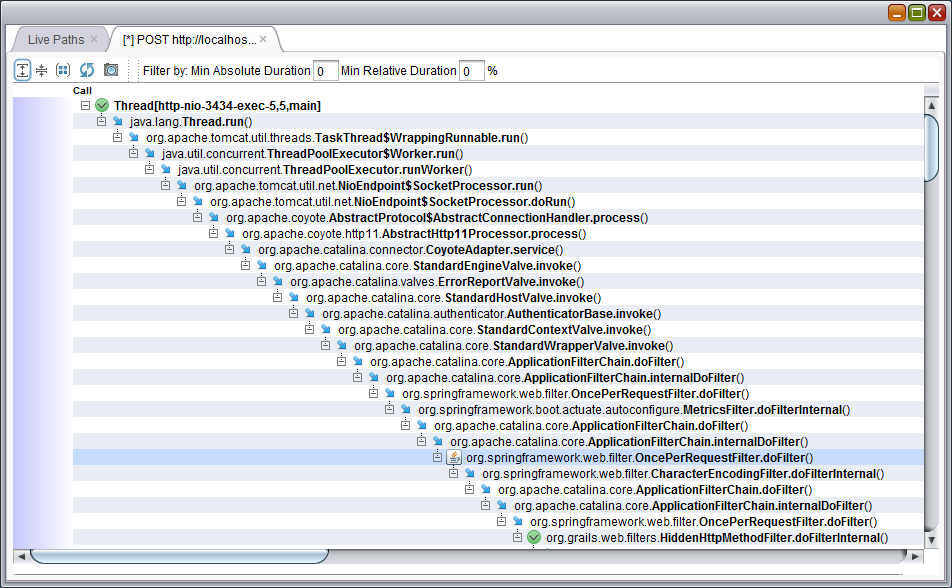 As in the
Live Paths
tab, the first column uses different shading for each agent.
The data that is also captured when CPU profiling is disabled appears in blue.
Follow these steps:
Reinvoke a Transaction
You can create baselines from transactions in
DevTest
Portal. The Application Trace Kit lets you reinvoke a transaction, which is similar to creating baselines. The advantage is that the process is quicker than creating baselines.
The following graphic shows the results of reinvoking a transaction. The expected response is the output that was originally recorded. The actual response is the output from reinvoking the transaction. The green square to the left of the
Actual Response
label indicates that the expected response and the actual response are identical.