Note that both calls are visible (the Vis column is checked). You can see this same behavior in r5.0 and r5.1. So which BlockFetch is actually called in the action diagram? This determination is made at action diagram load time. The result is sensitive to changes in the inheritance engine in recent CA Plex releases. The intention is that the Filter.BlockFetch should be called. To get this result at r5.5, CA has entered an additional replacement triple on the FOUNDATION pattern library:
Previously, the BlockFetch function was not explicitly replaced. Instead the replacement was made only on the scoping view:
With the revised algorithm used in CA Plex r5.5, this was not sufficient to force the required function replacement to occur. By adding an additional, explicit replacement on the BlockFetch itself, CA has been able to retain the required behavior in r5.5. Similar actions may be necessary in your own functions that exhibit this behavior.
Example 2: DiamondInheritance
Consider the following set of triples: 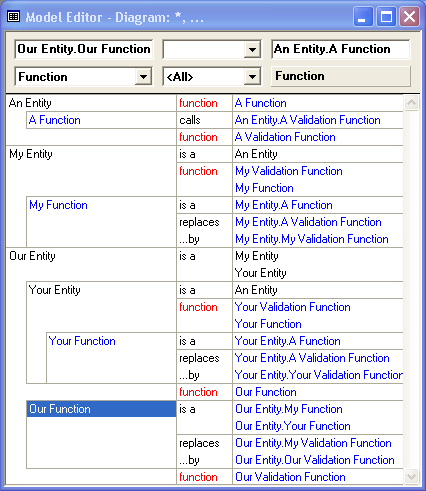 This type of scenario is known as
diamond inheritance
due to the shape of the resulting inheritance hierarchy as follows.

The inheritance hierarchy starts at
An Entity
, diverges, and then the two branches are brought back together at
Our Entity
. This situation is quite complex but the examples in real customer models are often even more complex with further branches and layers of inheritance involved.
If you view the Object Properties for the function Our Entity.Our Function then you can see the two calls triples, both visible. There are two important points to note: 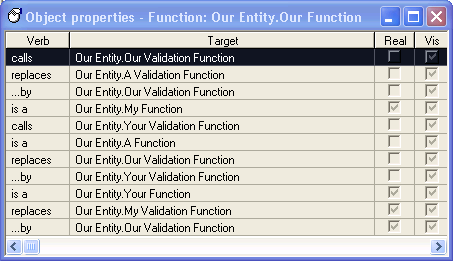