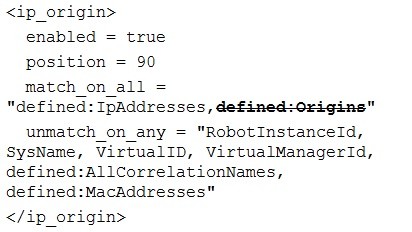 To create a new <ip> rule and disable the <ip_origin> rule:
No Overlapping Names
If there are no overlapping names in the UIM environment, disable origin in name correlation to avoid mismatches by origin using the same approach outlined for “No overlapping IP addresses”:
With both alternatives, you can disable the <fqdn> rule. The <name_origin> rule with origin removed or the new <name> rule will handle all names (FQDN and non-FQDN).
Custom Rule for Unique IP Addresses
If a subset of IP addresses is unique in the environment and the addresses do not need to be qualified by origin for correlation, you can create a custom rule to handle them. For example, if IP addresses in the subnet 10.20.32.0/20 are unique, you can create a UniqueIpAddresses correlation property to include the subnet and then create a new rule to use UniqueIpAddresses.
In the <defined_correlation_property> section, create UniqueIpAddresses by copying the IpAddresses property. Rename it to UniqueIpAddresses.  Add the subnet 10.20.32.0/20 to the included_values property. For example:
Create a <unique_ip> correlation rule:
Assign a position to the rule that is different from any of the existing rules.
Multiple rules can have the same position value if only one of those rules is enabled.
Monitoring Devices for Multiple Customers from a Single Robot/Probe
Consider this scenario for a managed service provider (MSP) using a single polling robot to monitor devices for multiple customers:
Robot device ABC:
Net_connect device configured with name:
The devices should correlate by <name_ip> even though the origins do not match.
If net_connect is configured only with the target IP address, the devices won’t correlate by <ip_origin> because the origins are different.  There are two ways to resolve this condition:
Review Correlation History
To view the results of correlation by device, query the CM_DEVICE_CORRELATION_HISTORY table in the UIM database. Columns represent the following topics.
The following are sample entries of the table.
Troubleshooting Correlation
If, having changed the correlation configuration, you see unexpected results, refer to the the correlation troubleshooting documentation.
discovery_server (Discovery Server)